Yesterday was the 40th anniversary of a device we all consider a central part of our computing experience, the mouse.

This BBC article is an excellent tribute to this small creature.

It is amazing how such a seemingly casual idea was the herald of a revolution in the way we use computers.

Update
This article also shows some light on this guy who was so forward thinking.

The video link near the beginning is over an hour but is very interesting in what it indicates.

You have to think that at this time computers were rooms full of equipment and that input was typically cards, paper tape and if you were very lucky a teleprinter, and the output was paper tape, paper and on occasion a screen. The idea of the average user interacting via a console was rare and the interactive interface which is second nature to us these days was thought of as a nonsense at the time.
Posted by John Hancock at 5:31 PM No comments:

My Precious - The iPhone after a couple of months use... 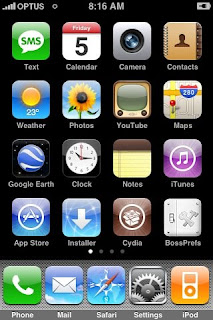 OK - here is the deal. First it was Nokia - great interface, ultra reliable and sort of easy syncing with a few glitches. Then it was onto the Smart Phone - HP Pocket PC with keyboard, GPS, BT and wifi plus expandable memory. OK, but extremely buggy. Constant crashing, running out of memory, slow, loosing calls for no obvious reason for several hours, sometimes up to a day at a time.

Cons;
Antiquated
OS not capable of more sophisticated apps
If the sync messed up was a nightmare to sort out.

Cons;
Slow
Very very buggy - really always felt like a beta version
Unable to upgrade the OS - no FW releases - stuck with the many bugs
Constantly missing calls for no good reason.

I decided to move towards a basic phone with a UMPC for the more sophisticated mobile computer experience. Untill the iPhone arrived.

I was not immediately taken with the iPhone, for a start it was only GSM, it was rather limited in memory and here in Australia it was quite difficult to get and really not worth the effort. Then they announced the 3G and a tentative date for Australia. I started to get interested. I wondered if this would be a nice intermediate compromise? The two devices in one.

My two sons bought iPhones when they were released so I got to see them up close and for all the limitations I did like it. It would be nice to have a phone that would work - as opposed to my pocket PC.

There is the story - one of frustration and constant phone envy - What is it like to have a phone that works? So after having it for a couple of months here is my first assessment.

My first impression was how smoothly everything worked out of the box. No sophisticated computer knowledge required to set it up, no esoteric syncing software to set up, just the old favourite iTunes that I have been using for years and it just appears magically in the left hand pane with a big Sync button down the bottom. It does require a little setup and as with every program the options take some explaining - whey does IT language have to be so obscure. Why can't the options be self explanatory - or at least have a little help popup to explain them. But for all that it is much easier than either Nokia synchronisation software or Active Sync.

The first thing was to sync my music. Select the sync only selected music and check all the wanted play-lists and it was done. Simplicity itself. However the inability to access the device's files directly and only able to sync one way and to only one computer is severely limiting. I have looked for mechanisms to overcome this limitation but so far to no avail.

The phone works. What more can I say. The inability to easily sync with my Outlook is a nuisance but I am depending less on Outlook - but for those still tied it can be rather problematic. I use Google for most things now - except for work mail. The mail app is nothing short of brilliant. I have two Gmail and one Yahoo account and it is very easy and has just the features one would want in a mobile mail app. Gmail contacts seem to work fine. No complaints really. There is an excelent web interface to the Gmail callendar but it does not integrate with the native iPhone callendar. It would have been nice to have integration with all of the web apps, it seems like half a job to me.

The interface is very nice to use. Smooth and easy to navigate and all the application interfaces have a nice consistency. Much more than any other device I have used, and much better than the PPC. Selecting an application is easy and navigating it is simplicity itself - although the developer does need to make the labels so that they make sense. One of the benefits of Apple tying it down like a homicidal maniac is that you are forced into this tightly defined interface. Not a bad thing on a device such as this.

As mentioned above the iPhione is quite reliable - maybe not as reliable as a basic phone but no where near as flaky as my PPC. The occasiona app crash (excepth for this reboot probelm I have - more below) it has been extremely stable.

The media player is as good as one would expect from Apple. Anything on the Nokia or the PPC looks plain ameturish compared to the iPhone media player. It is smooth, powerful, easy to use, and of resonable quality. The new Genius feature is a very nice addition. As above ther are some gripes but the media player is not a tacky add on as with other devices. One thing I will say is the lack of high def BT stero support is notable. I bought a pair of BT stero headphones for my PPC and so far they have lain idle. It is a nicely integrated powerful media player in its own rite.

May trees have been felled in defence of the browser and apart from some well documented gripes it works as advertised and is very smooth and easy to use. Most sites are properly rendered and easy to navigate. IE for PPC, eat your heart out.

The maps software is nothing short of brilliant. You get the map, sattelite view, directions, assisted GPS, markers and now with the 2.2 update you get street view. All of which is easy to use, fast and convinient. There is now only one thing lacking, that is turn by turn navigation. Why it is missing I have no idea. It is a serious limitation and its absence on what is otherwise such a comprehensive device is a complete mystery.

I do have an issue with my iPhone whereby on several occasions when the phone has been docked it went into a mode where by it would reboot every minute or so. It would continuously reboot until I removed it from the dock. The first time I thought it had developed a software fault and did a full restore. After it started happening the second time I realised I could stop it by removing it from the docking station. I come back the next day and it is fine. Still no idea why it does this.

Pros;
Great interface
Very easy to use
Consistent look and feel wherever you are
Many additional programs in every conceivable category to choose from - many free
Good email support
Most popular sites now have iPhone dedicated pages
First class media player

Cons;
No multitasking
Limited RAM
No memory expansion
No direct access to the file system (can using wireless if jailbroken)
Apple tie down the applications with a draconian approval process and limitations (Unless jailbroken)
No Stero BT support
Many of the apps are toys with no real porting of many serious computer programs as yet
Often tied to onerous phone plans
No turn by turn

Conclusuion
Using the iPhone is a pleasurable experience with very little down side. The limitations, some of which are really annoying, are far outweighed by the many advantages.

It would be nice to see a new model with more CPU grunt, more RAM, multitasking, better integration in some areas, better BT stack and turn by turn.

For all the limitations, given the choice, I would buy the iPhone again. Reliable device, smooth navigation, great feature set make this a great device. Add to this the great media player and navigatin it is a true winner.
Posted by John Hancock at 1:36 PM No comments:

It has been a while since I posted but this is a great contest. This month HP toghether with 50 sites are giveawaying US$6,000 of computer equipment.

One of the sites is Jake Lunding's Digital Lifestyle. Head on over to Jake Ludington’s HP Magic Giveaway to enter and check out the other sites involved.
Posted by John Hancock at 3:16 AM No comments:

At last my replacement weather station has arrives and is in the process of being installed.

It is a Lacrosse 3600 wireless and seems to be working fine except that it is purportedly susceptible to stray RF which there is plenty in the computer room where the base station is located. It has to be reasonably close to the server so that I can connect it to the server's RS-232C port to collect the data. I need to provide a longish cable so that I can move it elsewhere.

The data is here and the graphs are here. They do not look particularly pretty yet and I will be working on the layout. I am also going to upload the data to the Weather Underground, but the data is not loading. I am waiting until the quality issues are addressed and the scripting is finished.

I also need to make a Stevenson Shield to house the temperature and humidity sensor. A rudimentary shield is provided but it is not immune to radiation and it tends to read several degrees high in direct sunlight. In short a Stevenson Shield prevents direct sunlight from distorting the readings by providing a shelter for the sensors. It is no more than a ventilated box but needs to be designed so as to allow the sensors to read the characteristics of the surrounding air without bias from the radiant heat from the sun or the influence of surrounding structures. I have been looking at shield designs and most people tend to use layered rings from largish white or painted flower pot bases. From what I can see these may be more or less successful bur are never as good as the louvered wooden boxes as seen in the official weather stations. I have searched unsuccessfully for blueprints for one of these so it looks like once again I will be designing and building one from scratch. I will try to remember to take progress photos for reference and to assist anyone else who wants to make their own.

I will post some pictures for the voyeurs amongst us later.
Posted by John Hancock at 2:15 PM No comments: